Copyright for the images is owned by AMC, used by me under fair use.

In this post I’m going to walkthrough Janie Bryant’s costuming of art director Stan Rizzo, played by Jay Ferguson, in Mad Men from seasons 4-7. Stan’s costuming reflects his casual, schoolboy personality; his use of colour is interesting and is reflective of the show’s period (with his wearing of bolder, 1960s colours transitioning towards the earth tones that came to define Seventies fashion).

Stan joins Sterling Cooper Draper Pryce advertising agency as its art director. He replaces a void in the creative cast left by the departure of Salvatore Romano, who was the art director at Sterling Cooper. Stan is the antithesis of Sal’s style, who is “European”, favouring three-piece suits (with a contrasting waistcoat) and tightly knotted ties. They both do the same job, interacting with clients at important meetings, and are reflective of the different attitudes of Sterling Cooper and SCDP. The latter is ‘up and coming’ and fragile, while SC is painted as one of the leading and oldest firms on Madison Avenue, with a gigantic office and vast corporate structure.

The two characters both have very similar haircuts: short back and sides with length through the top, styled in a slicked side parting. Sal’s style is very ‘Instagram’, Pitti Uomo – the idea that men’s style should be about having lots of smart accessories like tie or collar pins and pocket squares, and the mixing of ornate but formal patterns like geometrics, checks, paisleys and stripes. This arena of men’s style is very codified – although Sal is quite different to the more straight-forward costuming of someone like Don Draper. This wasn’t the most stylish of introductions for Stan, in the riotous ‘Waldorf Stories’, but the building blocks are there for his early and late styles. His leather jacket reflects the fact he dislikes the traditional flannel or wool fabrics of mid-century suiting; and his polo-shirt, a preppy staple, complete with multi-coloured stripes is (at the most) smart-casual. Whereas Sal is introduced as a closeted flamingo, Stan is a preppy jock. We will see below that Stan is almost as much of a Dandy – but his dandyism is far more realistic, grounded in clothing other than spotless tailoring. The sheen of the ’50s, represented by Sal, gives way to the more casual (but, ultimately, predictable) individualism of Stan.

Stan’s preppy, Ivy League style is in contrast to his broad accent and schoolboy humour. He’s not posh – but he’s muscular, playful, self-confident (to the point of being extremely smug early on, steadily maturing as he settled into SCDP). His smart-casual clothes sum this up – white socks (with some sporty ribs and stripes) with brown boots, chinos or corduroy trousers, a slim-fitting poloshirt. He wears bold colours here: rich blue, bright yellow, burgundy. And always a pleasing contrast: the grey in the burgundy polo, the grey stripes. This shows he does put some thought into what he wears, he just doesn’t follow the same formulae that Don, or some of the more debonair suit-wearers (like Roger Sterling, Bert Cooper and Sal). It’s a wardrobe that’s defiantly office-inappropriate. Which sums up his character, and his contradictory role as an artist working as a “Mad Man“. Don says, managing Peggy, of the obnoxious Stan:

Because Stan is talented, and more experienced. You need to find a way to work with him, not the other way around.

Stan goes through one of the most pleasing journeys from an ethical point of view: a sexist, misogynist who is all-talk, to a jokey but well-intentioned man. Don’s protection of Stan is stubbornly misandrist on one level, but also provides the kernel for Peggy’s humbling of Stan later on in ‘Waldorf Stories‘. This can be read as the source of Stan’s overall journey in the show – facilitated by his relationship with Peggy and misfits like Michael Ginsberg, and the general rupturing caused by the late-’60s counter culture.

What to wear… a bold Fred Perry, Lacoste or Polo Ralph Lauren polo shirt, in wool for extra points, with a stripe if you are feeling like a copycat; slim chinos in a brown or beige colour; a pomaded side parting, carefully maintained.

The Man in the Mustard Check Suit

You can ‘suit up’ in the style of Stan – but it’s a bohemian, modish take on the idea of being business-appropriate, with strong patterns (cf. the omnipresent, but subtle, Prince of Wales check and pinstripe patterns in Don, Pete Campbell or Roger’s suits). Stan’s red and blue ensemble, with an ornate Paisley pattern tie, is when he is trying to convince Don that he should be allowed to strike out on the advertising frontier of California. He presents himself, here, as the creative-meets-businessman: as the future, the kind of guy needed to succeed in the ad industry’s Silicon Valley.

The second look is the closest Stan comes to fulfilling the generic office rules of the era: that striped tie and check suit is classic Sterling Cooper. Except the colour is completely out-there. Like his Red-and-Blue formal outfit, it’s a “Technicolor” take on the corporate armour. The extended, point collar also lends an early-20th Century feel. With this outfit he dresses similar to Ted Chaough of CGC and SC&P. Yes both Don in the mid-to-late seasons, and Ken Cosgrove, all sport brown suits, a colour that apparently has a less ‘formal’ edge, but I think looks very smart when paired with the slim ties and fits of the period. But they pair them with a white shirt and a club tie – Ted and Stan are far more daring. 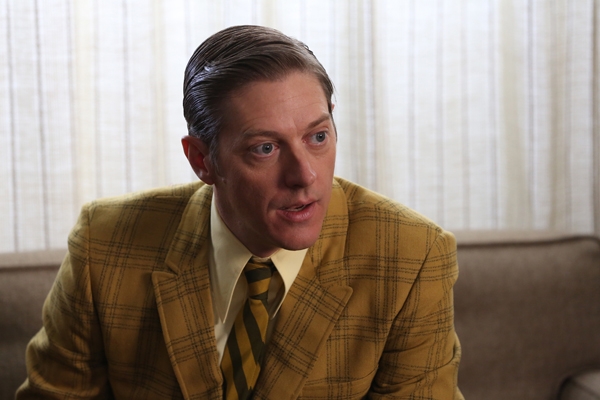 see creative Chaough, who also adores a roll-neck. Not the visual similarity between Stan and Ted – and their complex links with Peggy.

After the early polo-shirt years, Stan’s second love is Western shirts, or shirts with Western details (see the flaps on his chest pockets). Well, as you will see below, Western everything. He also loves a polo/roll-neck jumper (very mid-to-late 60s), and as you can see he frequently combines the two. His take on a waistcoat? Make it a dingy brown in corduroy. His use of pattern and fabrics for his shirts is also interesting; denim and heavy twill cotton set him apart.

Stan takes on more signifiers of the Counter Culture, Hippy movements as the show goes on (in his clothes and, of course, his hair, which goes from being a grown-out, fringed side-parting to a gloriously layered mane). This follows with his general mellowing. While his clothing here is very ‘masculine’, his gender politics, his masculinity, is integral to his character’s transformation. This is key to the conclusion of his storyline in Mad Men. He loses the programmatic strait-jacket preppy look and takes on a more creative sense of style, and lifestyle, as the ’60s fade into the ’70s. He’s one of the ‘new individuals’ of the period, not traumatised or obsessed by the past (cf. Don and Ginsberg). He’s softer, more of a dandy, but always with a Western, Cowboy edge that I think is seriously cool. It’s all part of his artistic flair: we tend to give artists a bit of slack in terms of a unique sense of style, I notice. It’d take a brave bloke to wear this down the pub, but I’d congratulate them on doing so. They’re working, Cowboy, clothes worn by a bourgeois ad-man who is always trying to set himself apart through his clothing.

It’s all about the accessorising and details: tassels on the suede jacket (so West Coast), a bolo tie, a neckerchief, a big belt buckle with some light-wash jeans, a shirt carefully rolled. It’s all about confidence and attitude here. You’d expect to see these kind of clothes outdoors, but Mad Men is almost exclusively an office-based show in terms of its sets. Stan stands out, but doesn’t look ridiculous because of his creative role, and the relatively bohemian nature of the Sterling Cooper Draper Pryce (later, Sterling Cooper & Partners) creative team.

What to wear: A suede jacket, perhaps with tassels – Saint Laurent Paris have an upmarket option; Western shirts in simple colours but interesting fabrics; roll necks, as the first visible layer; bolo/shoestring and ascot ties; jeans and cords with broad belts and heavy buckles; thick hair and glorious beard, all with attitude.

Saint Laurent Paris by Hedi Slimane – was at MrPorter.com

This site uses Akismet to reduce spam. Learn how your comment data is processed.